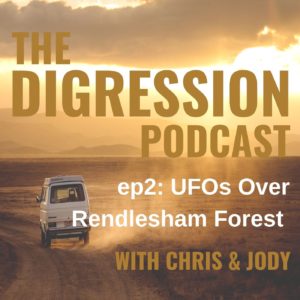 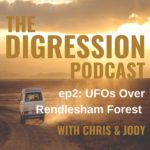 On the night of Christmas day, December 25, 1980, and into the early morning hours of December 26th, there were massive reports of UFO activity in the Rendlesham Forest area in the southeast of England. The forest is situated between two RAF bases operated by the USAF, Bentwaters and Woodbridge, so a crack team of USAF security forces personnel from Woodbridge were sent into the forest to investigate. They were never heard from again.

That’s not true, but they did report seeing a strange craft aloft a yellow mist. One of the Airmen took pictures of the craft, which had the film not been confiscated by the military would have provided definitive proof of the existence of UFOs. However, the siting and the spacecraft’s landing site was investigated by the local police who did indeed confirm the Airmen’s story.

Well, not exactly. But two days later on the evening of December 28th, another team of USAF security forces personnel led by the Deputy Base Commander reentered the forest to examine new UFO activity. They were never heard from again. That’s also not true. The team carried a radiation detector and measured radiation levels 10x normal background levels at the landing site. The entire episode was recorded on a portable cassette recorder, which chronicles the team’s intense pursuit of the flashing lights moving through the forest.