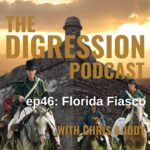 The Great Courses Plus has hundreds of topics taught by professors and experts, all in one enormous video library. Listen or watch on your computer or mobile device. Visit thedigressionpodcast.com/GCP today to start your special FREE MONTH of unlimited access to their full lecture library…and don’t miss our newest summertime recommendation: History’s Great Military Blunders and the Lessons They Teach