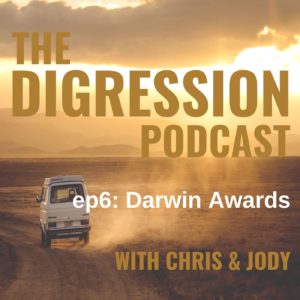 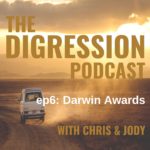 Each year, the Darwin Awards pay tribute to those individuals who “improve our gene pool–by removing themselves from it in the most spectacular way possible.” Named after Charles Darwin, the English biologist and the father of evolution theory, these awards are a testament to the dumb shit people do to precipitate their premature demise (or that of an appendage…or two). The Darwin Awards are certainly not lost on the military. I mean, what do you expect? You have the inherent danger of live munitions and operational machinery combined with a “hurry-up-and-wait” mindset that results in a population of bored GIs on some God-forsaken piece of real estate who have nothing better to do than turn to their buddy and say, “hey, watch this shit.” And, KABOOM!

In this podcast, we share some personal stories and lessons learned from the Darwin Award-worthy antics we observed throughout our military careers. Things like, benzocaine burns your eye; never park in front of a loaded F-16; jet intakes suck…A LOT; the GEICO squirrels are REAL; what goes up must come down; and evidently, there’s a fine line between “a shooting” and “a shooting in progress.”

Leave a Reply to The Digression Podcast Cancel reply