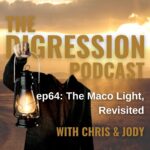 Our schedules got in the way of recording this week, so we’re revisiting one of our early episodes. We cleaned up the audio a bit (as best we could given the original Skype recordings) and added the cover art, which we didn’t start doing until later episodes. We had a good time with this episode, just dishing on ghost stories with the aid of good whiskey. So, what is The Maco Light?

Well, a hundred years and a thousand storytellers have blurred the legend of the Maco Light and we’re not going to make it any clearer. Joe Baldwin was a brakeman and was traveling in the caboose of an Atlantic Coast Line train through the little town of Maco, North Carolina, when all of a sudden it became uncoupled from its train. Was there something nefarious about this?

For more than 100 years, until the track was pulled up in the late 1970s, Joe’s body roamed the tracks each night with his trusty lantern in hand in an endless search for his severed head (you’d think he’d have searched the swamp, right?).

In addition to Joe, we talk about the haunted Carleton House on Fort Huachuca Army Base in Arizona. Where a ghost name Charlotte pranks the Strom family by ringing the doorbell and running away, taking pictures off the wall, and turning the lights out at night. Of course, there could be other non-paranormal explanations for these occurrences and we rag Col Strom for ’em.

We also discuss the C-130 Loadmaster at Little Rock AFB who was crushed between two Humvee’s being off-loaded from the plane, and how he sticks around after death to work on the plane. And finally, we touch on the USAF Academy cadet who after committing suicide in the 60s still practices his marching on the parade field each year when the new freshmen class arrives.

And as we go through these stories, we digress into a conversation about the reclamation of lost submarines, inoperable dishwashers, and 3M Command Strips.