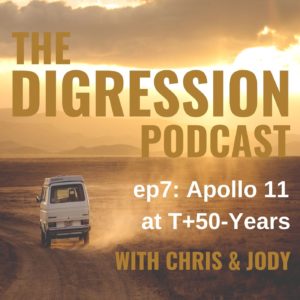 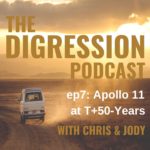 The Digression Podcast Guys were 6 and 2 when Neil Armstrong stepped down from the ladder of the Lunar Module, “Eagle”, onto the surface of the moon. In fact, it’s very likely, they were asleep at the very moment the United States won the space race. In retrospect, that really sucks, but what the hell, no one can experience every major event that occurs within their lifetimes. Hell, we often understand the significance of a historical event only in retrospect (like the Battle of Coral Sea, for example). Still, it’s great to be alive now to remember the day when the underdog United States came from behind to kick some Russian ass 240,000 miles from the planet Earth:July 20, 1969, the Eagle landed! Suck it, Ivan!

It’s probably safe to say that just about everybody knows something about the Apollo 11 moon landing. Of course, we may be going out on a limb with that assertion. And there are a lot of folks doing special podcasts for the Apollo 11 anniversary (an especially good one is Apollo 11: What We Saw with Bill Whittle. So, for this podcast, we discuss some items that either 1) we didn’t really know about before or 2) we just thought were really, really interesting. So, you’ll hear about the landing in some detail; where NASA got the flag that was placed on the moon; how Neil Armstrong may have been misquoted; the newscaster who was rendered speechless; what the Wright Brothers had to do with the Apollo mission; the ongoing 50-year experiment; a broken circuit breaker and waiting for swimmers in the Pacific; fuse; astronaut quarantine and a travel voucher for the trip of a lifetime; a dinosaur guidance computer and how the computer coder’s sense of humor has changed little in 50-years; and finally, our Dad’s contributions to the Apollo missions.

Here’re some great photos to go along with our podcast discussion. All of the photos come from the NASA websites, except the source code image which was found on Gizmodo and GI Joe came from Hasbro.

And here are some links to more great information on the Apollo 11 mission and the space program. Some of this information was included in the podcast, but some was not. It’s all good stuff!